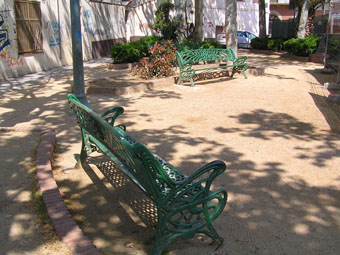 Canet de Mar was an essential point for the Catalan cooperatives. So much so, that the first cooperative in the Spanish Estate was founded in Canet with the name of “La Companyia”. Towards the 1920, a new entity, named “La Canetenca”, decided to buy the land behind the Church to build the social hall and the shop.
To the east side, a building designed by Rafael Maso was built; to the west side it was decided to make a square. The building, known popularly as the Odeon, was during the 70´s and 80´s a nest of culture due to the presence of numerous artists. On the other side, there are children´s games and plenty of Maple Trees, excellent for shade.