Portada > Servei a les persones > Promoció Econòmica, Consum i Turisme > Turisme > How to get here

How to get here

Canet de mar is in the Maresme Coast, 47km from Barcelona and 59km from Girona. The village is located between the Mediterranean Sea and Montnegre Natural Park. Due to this, Canet de Mar enjoys a warm sunny weather most of the year.

Canet can be reached by N-II Road or C-32 Highway. It is 40 minutes away from Barcelona and one hour away from Girona.
The AP-7 follows all the Catalan Coast from La Jonquera (French border) to the River Ebro (border with the Pais Valencià Region) and carries on to the south of the Peninsula. You get to Canet taking the exit marked “La Roca del Vallés” to the city of Mataró and from there taking the C-32 Highway to Canet.
I want to get to Canet de Mar from anywhere in Catalunya 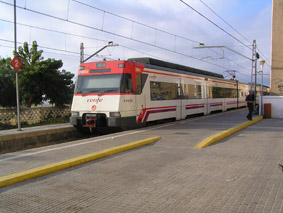 There is a train connexion from Barcelona train stations (Sants, Plaça Catalunya, Arc de Triomf and el Clot) line C1 Renfe. The journey takes 50 minutes and trains leave every 15 minutes during peak time and every 30 minutes the rest of the time.
I want to get to Canet by train

The nearest international airport is “El Prat” in Barcelona; 63 km away. It can be reached by train using line C1 to Sants railway station and then you can catch the train to Canet de Mar. The airport can also be reached by car. In this case, take theC-32 Highway to Barcelona and then the Ronda Litoral to the airport.A number of short and long distance airlines operate link this airport with a worldwide number of destinations. Also, you can come to Canet through the airport of Girona-Costa Brava where a number of low cost airlines operate with European destinations.
Informació de l´aeroport de Barcelona – El Prat
Informació de l'aeroport de Girona - Costa Brava

Distances with main other cities