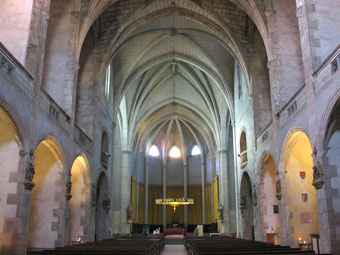 People coming down from Montnegre region required a worship place. The building was built between 1579 and 1591 under the hand of Onofre Anrich, although the current church is fruit of many redecorations. The most important one was made between 1940 and 1946, when the whole transept was rebuilt, demolished during the civil war.
The most important feature in the facade is the bell tower, 42 meters high, finished in 1805, symbolizing the golden period of the Canet navy. Architectonically, is very interesting because it makes a careful treatment of the geometrical forms. Inside the temple the different construction phases can be clearly appreciated. The first part is late gothic, whereas the crossing is neo gothic. The most holy chapel is also very interesting, re built towards 1950, in a modernized barroccan style.